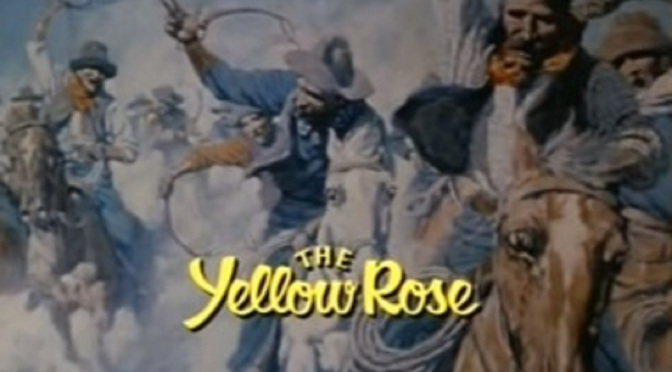 All that talk in 2018 about the 40th anniversary of Dallas’s debut got me thinking about one of the many pretenders to its prime time network soap opera throne—NBC’s The Yellow Rose—right around the time I saw that actress Susan Anspach had passed away. She was quite good in this expensive, all-star outing from NBC, so in memory of Miss Anspach, let’s look back at The Yellow Rose.

What could have been the best new drama of the 1983-1984 network television season…unfortunately pulled up lame in the end. Warner Bros.’ Archive Collection released (a few years back) The Yellow Rose: The Complete Series, a five-disc, 22-episode collection of the NBC would-be blockbuster nighttime soap starring Sam Elliott, Cybill Shepherd, David Soul, Edward Albert, Chuck Connors, Susan Anspach, Noah Beery, Jr. and Ken Curtis. Clearly an intended answer to big Nielsen winners Dallas and Dynasty by ratings loser NBC, The Yellow Rose had a gritty, compelling, epic sweep to its big, big Texas tale of two powerful families battling over land and oil. However, about mid-way through the season, the whole thing goes all wrong, and The Yellow Rose rode off into the sunset after just one season.

Click to purchase The Yellow Rose: The Complete Series on DVD at Amazon.

West Texas, 1983. The Yellow Rose ranch: 200,000 acres of steers and grassland…and not an oil derrick in sight. Holding down the fort in the face of falling meat prices is Roy Champion (David Soul), the troubled son of deceased Yellow Rose land baron Wade Champion, who made his son promise never to have oil pumps scar his pristine land. Owning shares in the ranch equal to Roy’s are Colleen Champion (Cybill Shepherd), the young, sexy bride who gave Wade the last of his many-scattered offspring: L.C. (“Love Child”) Champion (Michelle Bennett); Quisto Champion (Edward Albert), the half-Mexican result of one of Wade’s excursions south of the border; Whit Champion (Tom Schanley), the head-strong, naïve son of Roy; and Luther Dillard and Hoyt Coryell (Noah Beery, Jr. and Ken Curtis), two crusty old-timers who settled and worked the ranch with Wade. 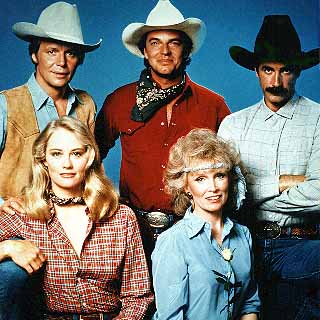 Minding things in the kitchen is Grace McKenzie (Susan Anspach), a free-spirited “gypsy” who currently bewitches young stud Whit. Low meat prices aren’t the only thorn in Roy’s side: the constant battle with ruthless neighbor Jeb Hollister (Chuck Connors) threatens The Yellow Rose at every turn. Still twisted inside over losing The Yellow Rose to Wade in a drunken horse race, Jeb vows to get back his birthright by any means necessary, including using his psychotic son, Lenny (Steve Sandor), to kill off various members of the Champion family. Daughter Juliette Hollister (Deborah Shelton) can’t believe her beloved daddy would stoop to such tactics, but newcomer-from-Huntsville Prison Chance (Sam Elliott) would: he knows exactly what Jeb’s capable of…and Chance has a secret reason to return to The Yellow Rose to set things right with the Champions and the Hollisters. 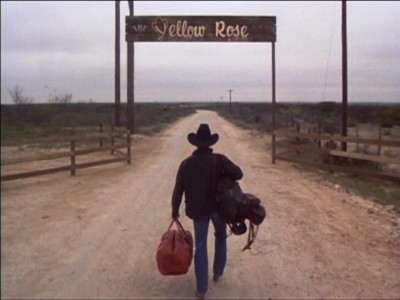 I never missed The Yellow Rose on Saturday nights back in the fall of ‘83 (…or at least I videotaped it for later). Highly touted at the time for its impeccable cast and its realistic slant on the nighttime soap opera conventions, The Yellow Rose was NBC’s last big gamble to get in on the early ’80s prime-time soap opera gravy train after its Morgan Fairchild-starred Flamingo Road petered out in 1981. With CBS and ABC having the four biggest soap powerhitters (Dallas, Falcon Crest, Knots Landing, and Dynasty), ratings’ loser NBC was desperate to get a Top Twenty serial soap on its schedule…and The Yellow Rose seemed their best bet to achieve that goal. 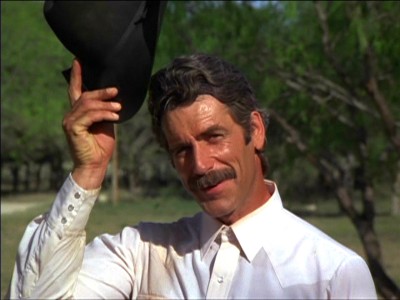 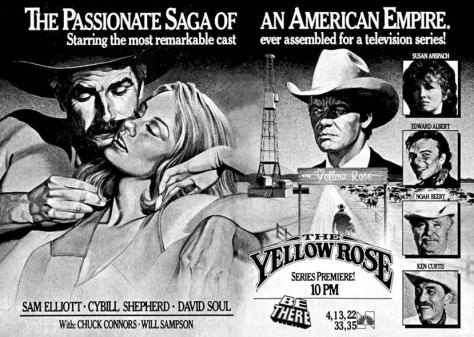 Certainly publicity was high for the show, considering NBC’s expensive budget (all that location shooting in Texas), and expensive cast (all top-flight actors including Shepherd, who’s perfectly cast here), along with a confident 22-episode full-season order from the network, before the ratings were ever in. However, a death-knell time-slot (Saturday nights at 10:00pm) and a general (yet incorrect) feeling on the part of the audience that The Yellow Rose was nothing more than a knock-off of the ratings’ king, Dallas, equaled minuscule viewing numbers right from the start. Couple that with a disastrous mid-season swing away from what made the show special in the first place, and The Yellow Rose was doomed to the land of “One and Done” TV series. 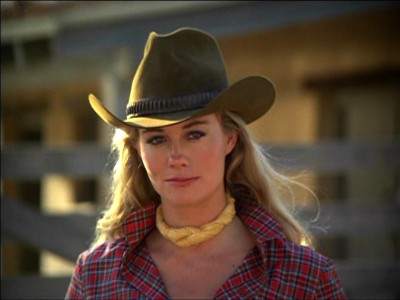 Now, if you read any of my Dallas reviews, then you know that I adore the florid, over-the-top, ballsy approach used by Dallas‘ producers. Soap opera histrionics filtered through crude, vibrant melodrama was Dallas‘ hallmark during its heyday, and nothing on TV was more entertaining to watch during that time period. However, The Yellow Rose, which would seem to steer dangerously close to Dallas territory with its locale and emphasis on warring families driven by dangerous, egomaniacal patriarchs (and their subsequently messed-up offspring), went in a completely different direction―at least at first. Taking pages from sources as divergent as Giant, The Big Valley, and Shakespearean tragedy, The Yellow Rose‘s focus was straight, realistic drama grafted onto the outsized framework of a nightly soap set in a Texas most of us could recognize (the Champions aren’t all that rich; their clothes aren’t all that expensive; they don’t go jetting around the county). The personal and familial struggles were epic-sized in The Yellow Rose, but they were played seriously and without operatic hype, giving the early episodes a credible dramatic weight that’s immediately discernible and quite set apart from Dallas‘ and Dynasty‘s cartoonish va-voom. 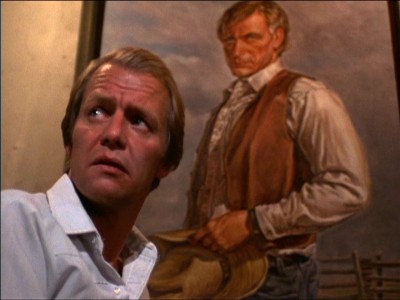 Unlike those two show’s fruitier, overripe scripting (and that’s not a negative for these series), The Yellow Rose‘s dialogue is grounded in a lower-key realism that rings true for the characters. Chance sounds like a real-life, thoughtful, quietly philosophical cowboy who wants Colleen as much as he wants his freedom, and who doesn’t think he’d make a good father to her babies. Roy sounds like a tortured, conscientious leader who’s dealing with an overwhelming number of stresses, including the crushing weight of his father’s legacy, his financial troubles with the ranch, his fear of failing, and his conflicted desire for Colleen. Characters’ tensions and conflicts are rooted in past sins and misdeeds, complicated by their current desires, making for elemental drama. 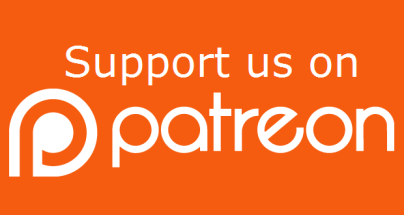 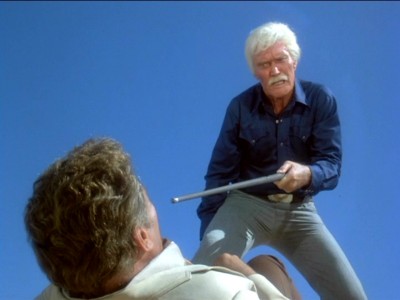 Early episodes focus on the good “four-way triangle” (if you will) of Chance wanting Colleen and wanting to help Grace…while Grace wants Chance and wants him to get the hell away from her…while Roy wants Colleen and worries about what drifter cowboy Chance wants at The Yellow Rose…while Chance wonders how he fits in as Roy’s half-brother. That relationship between Chance and Roy feels particularly real, unlike the (enjoyably) broad backstabbing of Bobby and J.R. Ewing. Both Chance and Roy are decent men who want to like each other, and who actually try to get along for the sake of “family,” forgiving each other when the other steps over the line. They fight, and they make up, and you believe they’re family (Elliott and Soul work beautifully together). 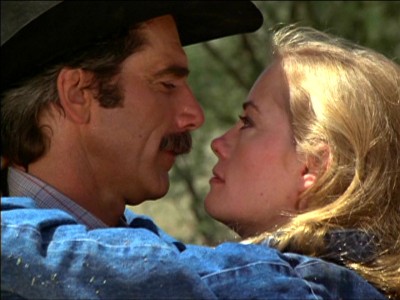 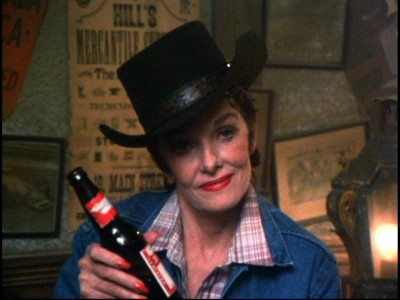 The potentially more outsized elements of the drama (the “soapier” aspects), including the villainy and the sex, are also handled with relative discretion compared to The Yellow Rose‘s prime time counterparts. Granite-like Chuck Connors is clearly having a ball as he whips his son with a cane, or orders a subordinate to sleep with him (she puts him off gently but admires his style…to which he promptly responds, “It gets better upstairs!” in a delighted line-reading), while later he gets to go deeper in character, explaining to his daughter his view of what life is for a man: fight for what’s yours (“You call it war…I call it life.”). He’s a vitally important anchor for the series, and Connors was never better. As for sex, Shepherd and Elliott are the main eye candy here, and put quite simply, Shepherd is a complete p.o.a. in her slim-fit jeans and black leather chaps and aviator sunglasses. Perfectly cast as a headstrong filly, she plays well off silent, sexy Elliott, whom she clearly enjoys working with, too (in a scene where he strips off his shirt, she leers believably, “You’d make some centerfold.”). 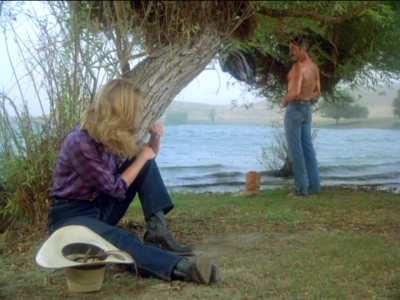 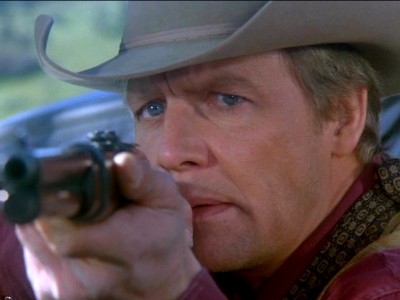 Solid action with lots of gunplay and big stunts (a mining explosion and rock slide, runaway cattle trucks, rodeos) punctuate the dialogue scenes, and all the while, Beery and Curtis act like a Greek cowboy chorus, commenting on the action while getting in enough old-timey “authentic frontier gibberish” to further root the drama in its believable western milieu (of course, all of this comes off even better than it would due to the high-powered cast of pros here). 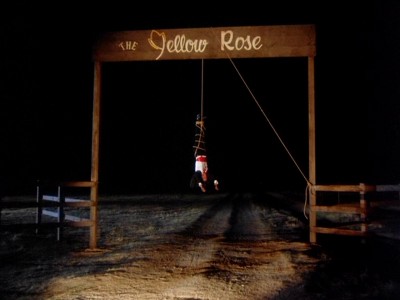 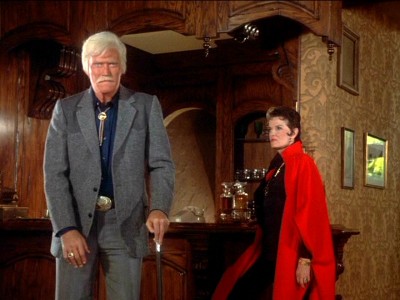 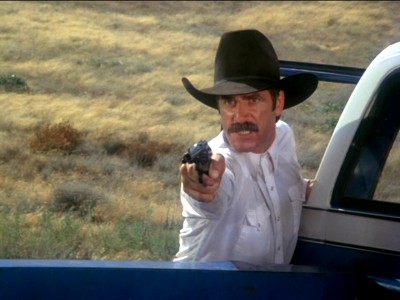 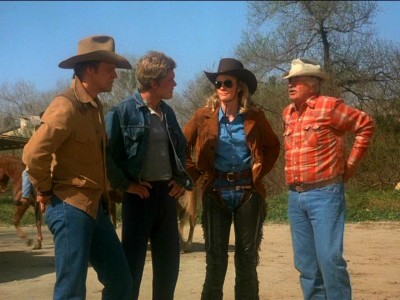 And instead of staying focused on the family tensions and personal sexual conflicts between the characters, The Yellow Rose‘s scriptwriters start to get awfully “messagey,” with stories about illegal aliens and little Mexican child thieves and Poncho Villa’s granddaughter and her buried treasure (?) that preached rather than entertained, turning drama into bathos (you know this is from liberal-minded NBC when the Champions appear to be the only ranchers in Texas who actually want illegals crossing their borders). All sorts of goofy stories start popping up, including a ridiculous, even insulting episode involving L.C. getting kidnapped by chicken hawks for an exclusive Los Angeles bordello that plays like a bad Charlie’s Angels outing (couldn’t she just have had trouble with a puppy back in Texas?), an episode that has nothing to do with the rest of the series (the L.A. locations seemed to me to be a cost-cutting measure). 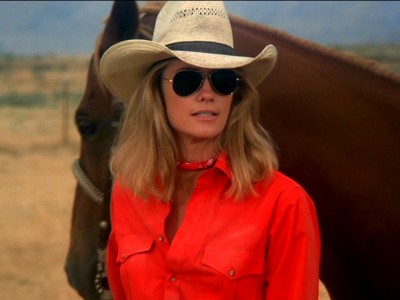 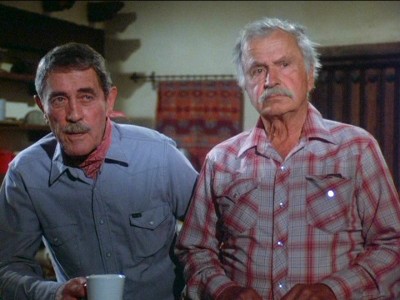 Stunt casting of icon Jane Russell as Jeb’s sister seems promising in a Joan Collins/Dynasty way (I remember all the publicity over it back in ’84), but then inexplicably, she drops out of sight for two episodes only to return for her death scene. Then the producers make the fatal mistake of getting rid of Jeb, effectively eliminating the series’ central crux, its raison d’etre. Without the villainy of Jeb Hollister, what’s the point of Chance’s internal war with his ancestry? Or Roy’s fight for the integrity of The Yellow Rose? We keep waiting for Connors to reappear in the standard jail cell scene where he vows vengeance…but he never comes back. Instead, B.J. and the Bear (sans The Bear) shows up ineffectually as another wastrel Champion; Pat Hingle has his two boring sons steal oil for him, and exploitation god William Smith reenacts Cape Fear with the cast―all to very silly effect. What does any of this have to do with the gritty, believable, sweeping family drama that premiered at the beginning of the 1983-1984 season? 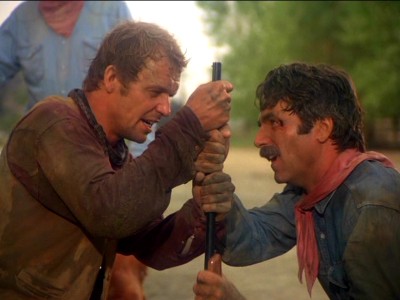 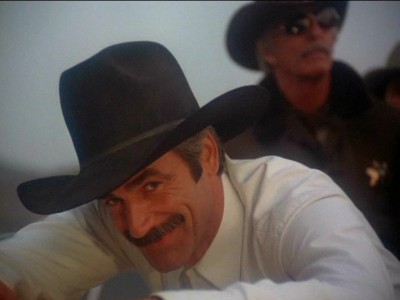 Well…how about, “nothing.” And “nothing” was also certainly the story with the ratings for The Yellow Rose, as well. Stuck on a slow, slow Saturday night directly against the second half of The CBS Saturday Night Movie (if you were already watching it, you tended not to switch half-way over to something new…even if the movie did stink) and the soon-to-be-canceled Fantasy Island, The Yellow Rose performed dismally even against that dying show, gaining nothing, either, from its lead-in: new series The Rousters with Chad Everett. By the end of the 1983-1984 season, The Yellow Rose came in 82nd out of all shows on prime-time television that year―the final round-up for the ambitious but ultimately flawed prime time soap (and it wasn’t alone: not one of NBC’s new shows that 1983-1984 season would be renewed for a second year―a remarkable achievement). 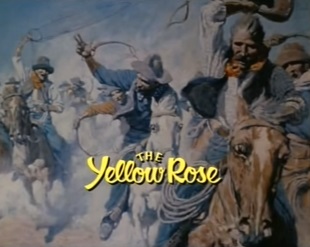 (This article originally appeared at DrunkTV.net.)

One thought on “‘The Yellow Rose’: Primetime soap could have been a contender”