When I was a kid, we had this great independent movie theater located in a crappy, run-down strip mall: the Glenbyrne Cinema. It used to be a Jerry Lewis Twin, but when that doomed “family films only” venture folded, the Glenbyrne started showing all the art house and foreign films that never came to any other cinema in Northwest Ohio; cool stuff like Breaker Morant and La Cage aux Folles. 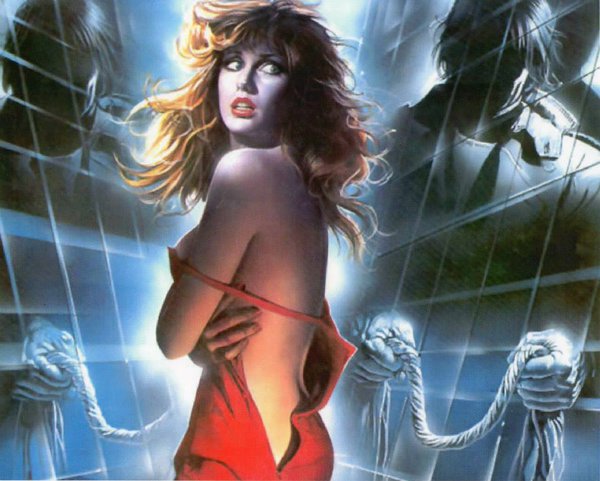 Click to purchase The Seduction on DVD at Amazon.

As a bonus, the Glenbyrne also featured all the grade B through Z American flicks that usually went to local drive-ins during the summer months, along with revival showings of exploitation classics (that’s how I was lucky enough to first see iconic titles like The Texas Chainsaw Massacre and Enter the Dragon on a big, wide movie screen). The Glenbyrne was, literally, an oasis in the pre-internet streaming, mainstream multiplex desert, and I’m forever grateful to its memory (oh, yes, the sad, abandoned building is still there…but the theater is long, long gone, friends).

What’s more, the Glenbyrne personnel were purposefully lax when checking I.D.s.; you were “of age” if you could get your fist full of quarters up on the ticket counter. So, of course, when I was 15, a friend and I went to see the R-rated The Seduction, starring luscious, pneumatic Morgan Fairchild, because…well, because why wouldn’t we go? After all, she was “Alone…Terrified…Trapped like an Animal!”, the poster art screamed. The TV trailer showed her either getting undressed or wielding a huge shotgun, blasting away at anything that moved. Back in ’82, that was serious male teen bait. We had a ball laughing at the whole thing.

Despite whatever high falutin’ intentions the moviemakers may have had with The Seduction (there has been some revisionist talk that it was prescient in addressing stalking), this is just overly familiar exploitation boilerplate, mainly as an excuse to show Fairchild in various stages of undress. And that is more than cool with me…but don’t try and snow me with any higher motives. In fact, when The Seduction finally drops its early teasing attitude, and goes straight for the jugular, it becomes quite interesting.

Morgan Fairchild plays Jaimie Douglas, a beautiful L.A. television anchorwoman who likes to swim nude in her pool (thank you, Jaimie!). Her boyfriend, Brandon (Michael Sarrazin), likes to watch her (his words, not mine—but I get it). Jaime answers back, “I like to be watched,” (god bless you, Jaimie…). Uh oh—wrong thing to say. You see, uber-creep and hillside neighbor Derek (Andrew Stevens), likes to watch Jaimie, too. He’s developed a sick obsession with Jaimie, and has convinced himself that she returns his love. 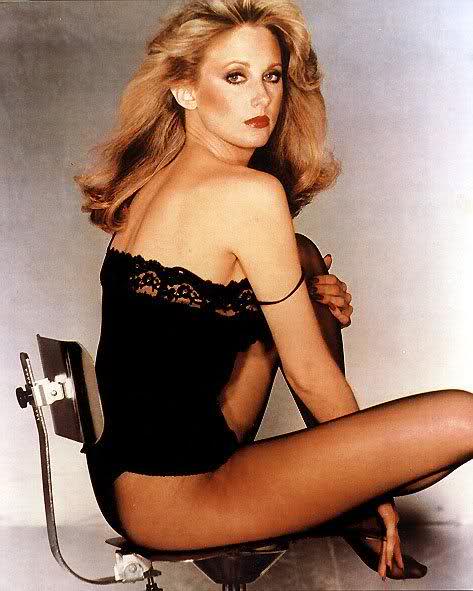 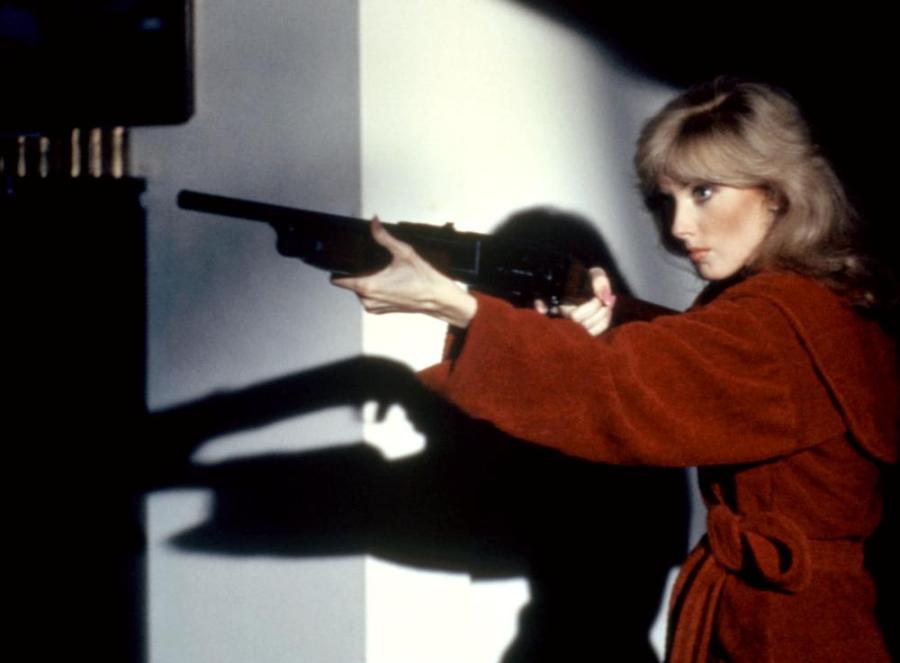 Flowers, candy and other gifts fail to convince Jaimie of his sincerity, so he moves up to Forcible Photography in Jaimie’s home, which naturally freaks out Jaimie. Brandon interrupts the Photo Shoot from Hell, and beats up Derek. But naturally, that only convinces Derek that Jaimie should be with him. Not even Brandon’s cop friend, Maxwell (poor Vince Edwards), can put a stop to Derek’s madness. Will Jaimie, once she’s Alone, Terrified and Trapped like an Animal, be able to use “the only weapon she has….herself,” to stop Derek?

The Seduction opens with a sensuous, hypnotic midnight swim, with a fully nude Fairchild paddling around her luxurious lighted pool, in glorious slow motion. Good start, guys. But frankly, it’s downhill from there. The entire movie exists to tease us into wondering when Fairchild is going to take her clothes off next, and quite frankly, after awhile, you get bored waiting for it. Lots of tense talk and lots of well-photographed stalking, minus a sufficient skin quotient, equals a gigantic c-blocking Lifetime movie with a bad case of blue b***s. 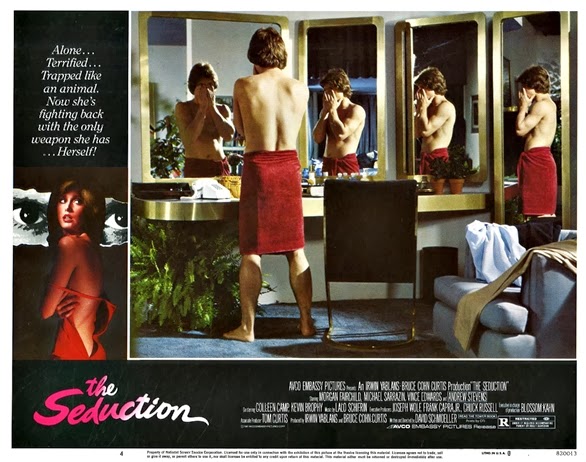 Michael Sarrazin, sometimes a good actor, has absolutely nothing to do here except deliver the movie’s funniest line: “Strong don’t mean jacksh#$ when you’re dealing with crazy” (Um…yeah). As well, seeing Sarrazin’s “Oh” face (thank you, Office Space) is something I could really have done without (poor Jackie Bisset). At least equally poor Vince Edwards has the gumption to show open contempt for the sorry part he’s dealt here (wow, did Ben Casey do absolutely jack squat for that guy…). Andrew Stevens does what he’s supposed to do: act like a psycho creep, which he’s done to equally good effect in numerous movies (hands down favorite: the kitty-killing Manson, Jr. whacko in the deliriously campy TV mini, Hollywood Wives).

As for Morgan Fairchild, yes; she’s absolutely gorgeous. Put me down as a fan of her beauty. Swedish cinematographer Mac Ahlberg must have been in love with her, because there’s not one bad angle on her in this film. But she’s not really asked to act here, just react, and there are times when she does that badly (her squealing for Stevens to stop when he’s photographing her is painfully funny). To be fair, she had been good in other roles (she was a real hoot as the sexy vixen on nighttime soap, Flamingo Road, as well as genuinely effective in her stint on Falcon Crest). But in The Seduction, she’s only asked to be a department store mannequin; ultimately, a gorgeous face and body just aren’t enough here to hold one’s interest.

When The Seduction finally stops the teasing, and gets down to the action, it’s not bad at all. But unfortunately, we’re only talking the last ten minutes of the movie. When Fairchild prepares to battle Stevens (by first getting naked for us—thank you—and then slipping into a slinky black negligee with full makeup), The Seduction at last kicks into gear. Their final confrontation is quite well acted, with Fairchild finally released from the rigid stricture of the director’s and cinematographer’s measuring tape. She’s tough talking, believable in her “seduction” of Derek, and she wields that pump-action shotgun very nicely (I’m getting the vapors just thinking about it…). It’s too bad The Seduction didn’t abandon all that glossy magazine crap of endless tracking shots of beautiful Morgan, and instead got down and dirty with her right from the beginning, and let her act. It may have made all the difference for Fairchild’s aborted movie career.