I got a post-it note from my editor telling me to: 1) call my bookie and 2) please give him a break, what with all the horror/action DVD reviews lately (he—my editor, not my bookie—loves to leave me little notes, like “the lawyer thinks a quiet pay-off is best,” or “Quit drinking my desk Scotch,”). So…I guess a breather from all the video mayhem is in order, and with the Thanksgiving and Christmas holidays coming up, some family-friendly reviews certainly won’t hurt my chances with the fat white man in the big red suit, either. Therefore…why not start with that little ***** Strawberry Shortcake?

Click to purchase this Strawberry Shortcake Double Feature at Amazon.

And what a profitable little money-spinning fad it turned out to be, too. I might not have been what you would call an O.G. “fan” of Strawberry Shortcake at her inception (lucky for me, Mom and Pop were one of the 100% of parents back then who didn’t believe in “gender fluidity”). However, from personal recall I can tell you this: by the early 1980s, girls, little and big, were crazy about the sweet, adorable ragdoll who lived in a shortcake house. If I didn’t see enough small-fry Strawberry Shortcake crap in the stores, I saw plenty more at school, where hot senior girls (I feel faint…) thought it was cute and funny and ironic to have Strawberry Shortcake folders, notebook paper, pencils, even backpacks (witches’ coven. Just saying…).

No self-respecting toy line from the 1980s would be complete without at least one TV special, and Strawberry Shortcake was certainly no exception. Legendary Rankin-Bass scripter Romeo Muller (Rudolph, the Red-Nosed Reindeer, Santa Claus is Comin’ to Town, The Little Drummer Boy, Frosty the Snowman) reportedly pitched the idea of a Strawberry Shortcake TV special to Kenner and American Greetings, who signed him on as writer, co-producer, and lyricist, as well as doing the voice-over work as the toon’s narrator, Mr. Sun (reportedly, Muller was instructed by Kenner to “merchandize” any additions he made to the script, including his newly-created villain, the Peculiar Purple Pie Man).

When The World of Strawberry Shortcake was completed, it was offered to the “Big Three” networks for broadcast, but all declined. It’s possible this happened because the networks were still getting flak from critics and various do-gooders about children’s television being nothing more than advertisement for the toy companies (god spare us from humorless, sanctimonious, self-righteous do-gooders. And the Irish). The World of Strawberry Shortcake was instead syndicated to independent television stations (that’s the best: cash money in hand before a single rating number appears), airing on March 28th, 1980…just in time, curiously, for a whole line of tie-in Shortcake merchandise suddenly available in stores across the country.

The World of Strawberry Shortcake introduces us to Strawberry, the little girl who, along with her calico cat Custard, lives in a shortcake, and who owns Strawberry Lands, where hundreds of the best berries are grown. Her friends live there, too, including Blueberry Muffin, Huckleberry Pie, Apple Dumplin’, Raspberry Tart (who, I kid you not, is voiced by the Pamela Anderson…raspberry tart, indeed), and Plum Pudding. The Sun serves as our narrator, as well as protector and friend to Strawberry.

And he’s needed in such a role because looking down on Strawberry Land is the evil, mean Peculiar Purple Pie Man of Porcupine Peak, who envies Strawberry’s superior baking abilities, and who uses his Berry Birds to steal Strawberry’s crops. For this cartoon adventure, Strawberry’s friends arrange a secret birthday party for her in Lilac Park, but by keeping it a secret, they make Strawberry sad because they don’t have time to play with her. Of course, all is righted in the end, and they even manage to make friends with the Pie Man.

In Strawberry Shortcake in Big Apple City, Strawberry is one of two finalists for a big televised bake-off in Big Apple City–and guess who the other contestant is? That’s right: the Pie Man. Strawberry explores the big city, and meets some new friends, including Orange Blossom, who lives in the bohemian artists colony of Spinach Village, along with model Lemon Meringue, scientist T.N. Honey, who hails from England, baby Apricot, and Tamale the Mole (watch out for that accent, senor!). Naturally, the Pie Man plots Strawberry’s downfall, including wrecking her stove and stealing her ingredients, but of course, Strawberry comes out on top at the end. 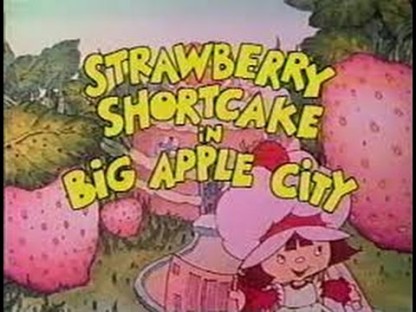 Of the two, the first special, The World of Strawberry Shortcake, wins out, for keeping the story in Strawberry Land (more magical), and for delivering a couple of insanely catchy tunes performed by none other than Flo and Eddie (Mark Volman and Howard Kaylan) of The Turtles fame (hey? Want to laugh at these guys for performing on a kids’ special? Yeah? Well…they sold 5 million units of their first Strawberry Shortcake record in 1980. So who’s laughing now?). I defy anyone to hear Smile a Sunny Morning and not hum it throughout the day (take my word, though: don’t do it on the bus…). And listening to Strawberry Shortcake Theme is like smoking crack through a PCP-laced pipe: it just keeps building and bouncing and growing in your head until that electronically-altered snotty alien munchkin chorus of “Strawberry Shortcake!” drops, and all you want to do is grab Diane Linkletter’s hand and fly off a building (still too soon for that? Yes? No?).

The World of Strawberry Shortcake is incredibly simple and sweet, the perfect kind of entertainment for a little innocent child…which was all well and good for those simpleton parents back in the 1980s, what with their racist, misogynist, homophobic, xenophobic, Pop-O-Matic privilege (you know, Oprah’s right: when you alls just gonna die off?). But I know modern mothers today want their little comrades to have something of substance in their cartoons, something “woke.” We can’t have kids just enjoying themselves: they gotta pay for that privilege!

So here are a few hacks for today’s overly-sensitive douchebags to get through The World of Strawberry Shortcake without Twittering themselves into a coma. Now get this: Strawberry Shortcake is the owner of Strawberry Lands. That’s right! She’s “the Man!” She’s the colonial oppressor of her serf tenants! But wait, it’s okay! She’s a womyn first…so, #MeToo, Ms. Shortcake (I believe all the strawberries…)! And yes, you are correct! That animation company did make those cherry-topped cream puffs and the Purple Pieman’s crustily phallic Porcupine Peak rather obvious…so you don’t need to get on Instagram to check if your 1,200 followers are outraged, too. You spotted that! Congratulations! You’re smarter and better than those Nazi Trump voters you hate (bet they didn’t see what you saw, those un-college educated dolts)! And speaking of that Peculiar (indeed) Pie Man…if you find yourself giggling against your p.c. will at his queenly delivery, the one that sounds like a cross between Vincent Price and Billy de Wolfe, it’s okay to laugh! You’re not evil! I have it on good authority that the ghosts of Paul Lynde and Charles Nelson Reilly have each descended from their Golden Closets (of course there’s glitter on their wings) to give the Purple Pieman their “Tinkerbell Seal of Approval” (they can do that—you can’t, cisgender oppressor!).

As for Strawberry Shortcake in Big Apple City, except for that groovy, slightly disturbing Beatles-esque/Pink Floyd-ish “Big Apple City” song from Flo and Eddie (it bums out Strawberry so much, she has to go cool out in the park, you know?), the sequel isn’t as much fun (yaassss that review is a cheat but you try following that rant above).

See now why so many people of a certain age have a terrible, almost crushing nostalgia for charming, unpretentious fare like The World of Strawberry Shortcake and Strawberry Shortcake in Big Apple City? If you don’t, then try repeating one of Strawberry’s best lines, “There’s a good side to everyone,” in the middle of your next local Antifa riot….